It has been a heck of a ride. Our last blog post was in 2019. We’ve been through a lot in the last two and a half years. This short blog post is a quick hello to all who are following us, and a listing of all essential news.

First thing first: we’re doing okay! (many have asked by email, and I thank them for asking.) The team have grown a bit, but I still need to find the time to do a photo shoot day and update the team’s page.

Like anybody working in the electronics industry, we’re facing a once-in-a-lifetime semiconductor crisis. Yet, we’ve managed to find solutions to the shortages, most of the time.

Regarding our products portfolio, here is the actual situation - in all honesty!

We’re currently unable to manufacture anymore SP209 device due to shortage in Spartan 6 Xilinx parts. You may still find stock at Farnell, RS-Components or other distributors. Since we don’t exactly know where’s Xilinx heading since their purchase by AMD (specially with regard to entry level FPGAs like the Spartan 6), we have decided to work on a replacement version of the SP209 series:

We’re working on the SP259 series

Basically, the SP259 series will take all the features of the SP209 and add some nice additions:

The price will remain the same as legacy SP209 series for both standard and industrial versions.

We’re proud to introduce the very first device in the SP1000G Series. Ever since we made the SQ series in 2014, we were getting more and more requests to do a more professional version of it: an industry leading Logic Analyzer and Arbitrary Pattern Generator. So we design the SP1000G series, which comes in three flavors:

SP1000G devices are designed to offer maximum flexibility when it comes to signal generation. For example, you can build chunks of signals (a chunk can be a UART packet, an SPI Frame or an I2C request), generate it, then move to the next chunk. A signal decoder script can, of course, decode the generated signal or the response from the device under test in a live streaming fashion.

It’s worth mentioning that SP1018G is actually being used by leading semiconductor manufacturers like ST-Microelectronics and Bosch GmbH.

Nicolas and myself (Ibrahim) have been working on a new version of ScanaStudio that is totally “API based”. What this means is that it uses internally, the same public API interfaces to control logic anlyzer devices. The code have been rewritten (yes, again) to take full advantage of C++17. The result is a cleaner code with maximum reusability, and hopefully, much more stable operation.

Many new features and enhancements have been added to the Scripting interface. Many of the those new features are related to SP1018G and its unique pattern generator. Another very nice feature is the VAC (Virtual Analog Channel) 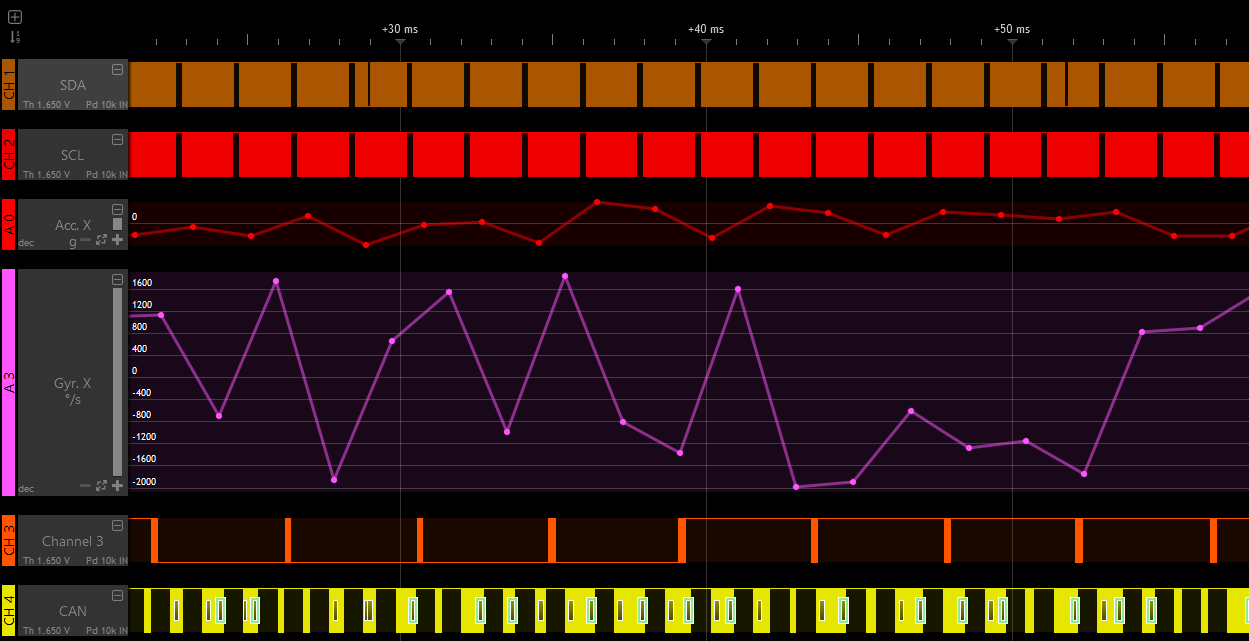 Analog channels for a logic analyzer? Well, yes, but, it’s virtual! Let me explain this nice little feature. Suppose you’re looking at the PWM signal driving motor, or decoding the output of an I2C digital accelerometer, wouldn’t it be nice to see the values plotted on a graph instead of just reading numbers? That’s exactly why this feature was added. plotting values on a graph is often the best way to see meaningful information. VACs autoscale, offer linear or log scaling and can be configured in many ways (color, units and size).

I almost forgot: We have new visual identity! But you’ve got this part already…