SP209 series logic analyzers and protocol decoders offer in depth analysis of logic signals and protocols with 200MHz (5ns) timing resolution. 9-channel operation allows 8-bit parallel data to be captured along with a clock or strobe signal. SP209 range of logic analyzers is composed of two devices, SP209 and SP209i. Both offer 9 logic inputs, but SP209i integrates industrial receivers for CAN, LIN, RS232 and RS485 buses.

Below is a top view of the SP209i Logic Analyzer:

SP209 Series logic analyzers connects to a computer via a USB cable. A free software - called ScanaStudio - is used to configure the device and display captured signals. The software can also be used to further analyze the captured samples by decoding protocols like I2C, SPI or UART.

USB based logic analyzers (ones that don???t have a display and rely on a computer for that matter) usually operate according to one of two schemes:

SP209 combines the advantages of both streaming and embedded memory techniques. An embedded 2Gb DDR-3 memory stores captured samples at 200 MHz sampling rate on all channels, while a USB interface compresses and transfers the data simultaneously, effectively emptying the embedded memory and making more room for new samples. This results is a logic analyzer that can capture dozens of minutes of logic signals activity on 9 channels at 200 MSPS.

The diagram below shows the flow of sampled signals:

SP209 series logic analyzers are perfectly adapted for demanding applications, where it is needed to capture logic signals with maximum time resolution on all 9 channels.

On top of standard logic analysis, the industrial version (SP209i) can be used to analyzer industrial buses. Furthermore, one can use both the industrial inputs and logic inputs to capture the signals before and after an onboard transceiver. This can help characterizing a system like propagation delays or transceiver intermittent failures. 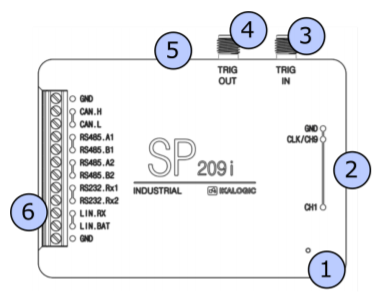 SP209(i) logic analyzer have the following ports and interfaces:

SP209 drivers are included and should be automatically installed with ScanaStudio software. Because certain system configurations may require manual installation, the following sections provide guide lines to perform driver install or update for SP209.

Linux and MacOS do not need any specific operations to install SP209 device on the system. The most important part is to ensure the SP209 is directly connected to a root USB hub, and not via a HUB.

In case of doubt, or if any diagnostic is needed, the SP209 device uses the following USB VID / PID pair:

SP209 uses an FTDI chip, loaded with a proprietary PID that is specific to Ikalogic products. This prevents FTDI drivers from claiming the device as an FTDI serial COM port.

SO209 status led can either be Off, White, Orange or blinking.