Important Note: Scanalogic-2 is the very first product launched by Ikalogic and is now discontinued. It have been superseded by SQ series logic analyzers in 2014. We of course continue to provide full support for the users who have purchased Scanalogic-2 devices.

ScanaLogic-2 is a compact and portable logic analyzer and signal generator. It directly connects to a computer via an USB connection. The PC given software is used to display the signals and the decoding, generate signals and configure capture parameters (like trigger option, sampling frequency, etc.). It’s very simple to use, it is easily mastered by beginners and professionals, thanks to the intuitive PC software featuring all the scrolling and navigation options you would expect in any professional software. Scanalogic-2 introduces new, very useful features, like the mixed mode, allowing you to generate/playback digital signals, while recording the response on other channels, all at the same time! 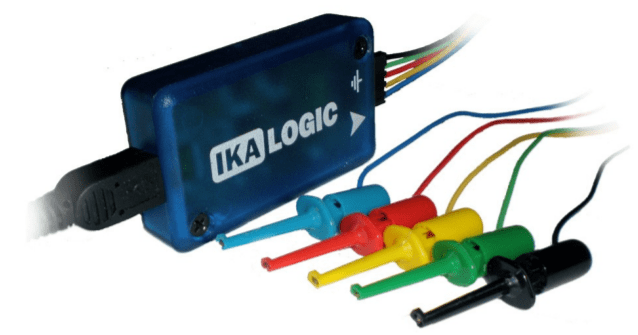 ScanaLogic-2 relies on a set of embedded RAM memory chips that store samples on 4 channels simultaneously. The maximum sampling frequency is 20MHz and the RAM is able to store 256K points per channel. It’s possible to reduce the sampling rate in order to increase total capture time.

Scanalogic-2 allows signals to be generated on 2 channels, while signals to be captured on the 2 other channels. Unlike newer SQ series devices, Scanalogic-2’s output is fixed to 3.6V push-pull. (SQ series offer much more versatile probes I/O configuration).

Note: When operating Scanalogic-2 in mixed mode (Capture & generate), it is only possible to set two channels as “output”, while the two others are “inputs”. It’s not possible, for example, to set 3 channels as outputs and 1 channel as input. (This limitation have been addressed in newer SQ series logic analyzer and pattern generators).

The ScanaLogic-2 device has one yellow status LED, which can indicate different statuses:

Just like all other Ikalogic logic analyzers, ScanaStudio software is needed to configure the logic analyzer, to download captured signals and to visualize them.

Currently, Scanalogic-2 is not supported by latest ScanaStudio releases (3.0) however, it’s planned to reintroduce support for Scanalogic-2 devices in future software releases.

For the time being, to use a ScanaLogic-2 device, you can download an older ScanaStudio version (V2.3) from the links below:

Scanalogic-2 enumerates on the USB port as an HID device (Human Interface Device). Therefore, no any driver is needed on any of the supported platforms (Win/Mac/Linux). It is automatically recognized just like a keyboard or a mouse.

Once fully mounted, this DIY (Do It Yourself) kit, will provide the same function as the standard Scanalogic-2 device.

The kit assembly instructions can be downloaded here: