Many (if not all) protocol decoder add-on scripts produce an important amount of data. Whether it’s SPI, UART or CAN bus, it can be non practical to search for the data directly on the logic signals waveform (as in the image bellow):

Zooming out on that same kind of signals shows the whole captures (as in the image below), but as explained before, make it impossible to read the value of decoded bytes (unless you constantly zoom in and out):

To make it easier to navigate through important amounts of decoded data packets and make sense out of its content, ScanaStudio offer special “Alternative” data views:

Those views can be accessed through ScanaStudio’s main menu as shown in the image below: 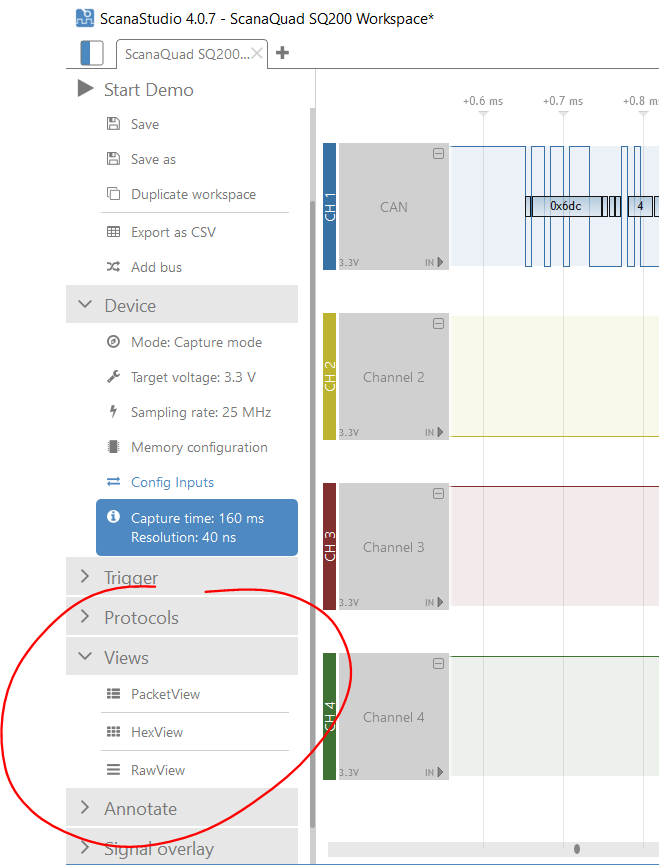 As it will be explained below, each and every one of those views have particular applications and advantages. As a matter of fact, not all protocol scripts implement all those views. It all depends on what makes sense for a specific protocol.

The HEX view shows a memory-dump-like view, where each byte is given a row and column address. Also, ASCII equivalent characters are displayed when possible (otherwise, dots are displayed)

Obviously, HEX view is not practical for all applications and for all decoders. For example, If you have captured signals showing a firmware being updated via an UART interface, it can make a lot of sense to use the HEX view and adjust the number of columns in such a way to display firmware content in meaningful fashion (and compare it to intel formatted HEX files, for example). That being said, for other protocols like I2C, it may be more difficult to make good usage of the HEX view, and that’s why other data views are provided.

As the name implies, this view provides a way of visualizing captured and decoded data as packets: 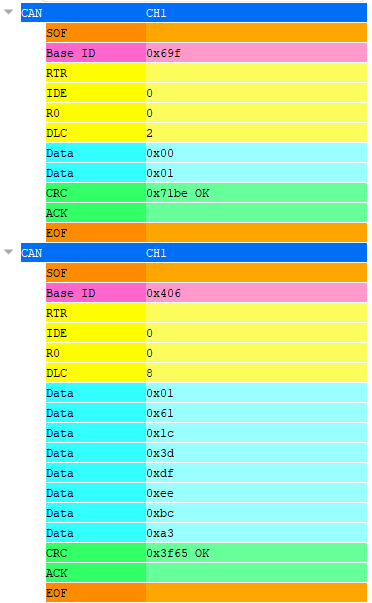 Just like the HEX View is not good for every protocol, Packet view is also adapted to specific protocols. For instance, UART protocol which does not define any structure for packets and instead just defines encoding of bytes wouldn’t make much use of the Packet View, since there are no such thing as “packets” in UART. However when it comes to MODBUS protocol, which is a layer above UART protocol and defines a structure for packets, it make sense to use the Packet View. Below is an example of MODBUS packets decoded and displayed in Paccket View.

Double clicking on an item let’s your pinpoint the actual logic signals related to that packet.

The raw view is very simplistic and is implemented by-default for all protocol decoders. Raw view simply lists the decoded items, whether it’s a start bit, a data byte or an acknowledge bit. Like other views, Raw Views can be filtered out to search for a specific item. Double clicking on an item let’s your pinpoint the actual logic signals related to that raw view item.